Jump to content
HAPPY THANKSGIVING FROM OUR HAM COMMUNITY FAMILIES TO YOURS! ×

Who is this Roger guy? And why do we keep talking about him? 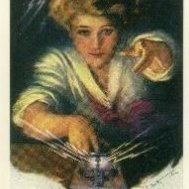